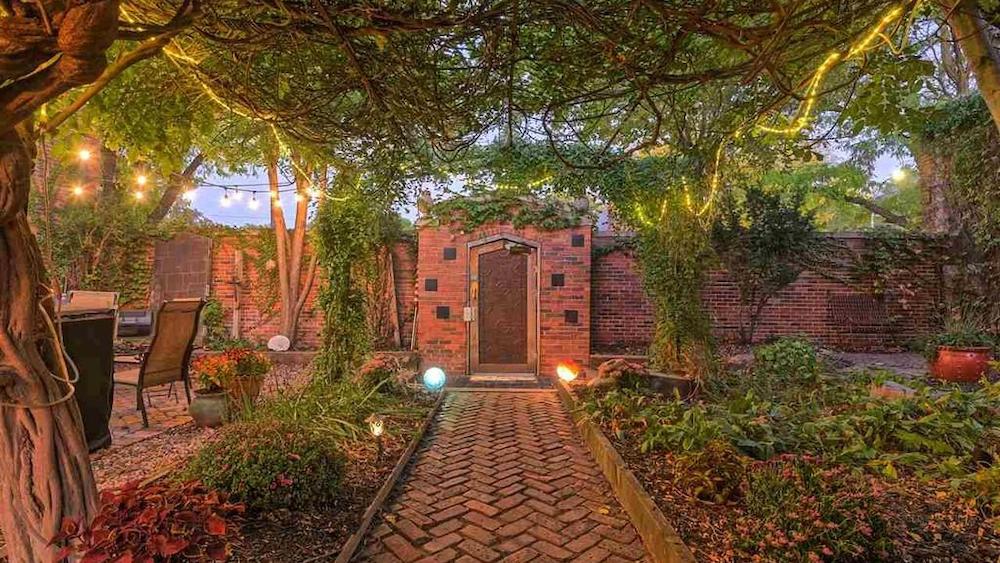 A place where people used to dance the polka all night long is available for purchase. Accordion not included.

The property on 13th Street in Omaha, NE, is on the market for $999,900, and offers an array of opportunities for an enterprising buyer.

âOriginally, it was a Czechoslovakian dance hall, and then it was converted into a bar,â explains the listing agent, Drew Halvorson.

Built in 1895, the main hall was also a popular restaurant, before an artist and home renovator team purchased the property in 1993 and worked their magic. There are now three separate living spaces on the property.

The former dance hall became their home, and the parking lot was transformed into a 5,000-square-foot garden.

Vines, fountains, and plenty of other interesting touches decorate the space.

âWhen you first come in the gate, you walk into this very serene and beautiful garden,â Halvorson notes. âOnce you get to the center of it, it opens up, and you have a big deck space and little seating areas throughout the entire courtyard.â

The main house measures 3,324 square feet, with two bedrooms and 2.5 bathrooms. Overhead, the ceilings soar to a height of 20 feet.

Watch: Back to School? Giant Tennessee Home Was Once an Educational Institution

The kitchen and dining areas sit just off the main living space. Halvorson touts the kitchen as a great space for gathering.

It has a large island, high-end appliances, a custom range hood, and a pantry with plenty of storage.

The two large bedrooms are upstairs, at opposite ends of the house, each accessed by a huge staircase.

Halvorson explains that the master bedroom has a fireplace, two walk-in closets on either side, and a huge, wraparound bathroom.

A ladder goes up into an additional space that the current owners use as a place for yoga and meditation. A door leads out to a rooftop deck with views of the city skyline.

The guesthouse on the property has two apartments. One has three bedrooms and 1.5 bathrooms, and the other is a basement unit with one bedroom and one bathroom.

Built in 1890, the building was originally called the Settlement House. It was used as a boarding house where immigrants could live until they learned English, found a job, and saved enough money to move out.

Both units could provide a buyer with steady revenue to offset the monthly mortgage payment.

âThe property itself could provide some very good income,” says the agent.

Halvorson says the larger, two-story unit rents for $1,750 a month, and the smaller one nets about $750.

He’s targeting investors and adds that the units could serve either as long-term rentals or be offered as a nightly vacation rental.

The Omaha downtown area, zoo, and other attractions are nearby, making the spot attractive for vacation rentals.

There are also three detached garage spaces, a rarity in the neighborhood known as Little Bohemia.

âA one-car garage is a win in this old historic area of Omaha,â Halvorson says. âWhen it was originally built, there just were not a lot of garages or carriage houses whatsoever.â

Since the property was once zoned commercial, the new owners could keep the space as residential or convert it back into a bar or other commercial venture.

âThe perfect buyer is probably somebody who has the vision for mixed use. Somebody who maybe wants to live in the main house and have some income on the side with the rental property. I think that would be perfect scenario No. 1,â Halvorson notes.

Scenario No. 2, he adds, might be somebody who decided to live in the main house and to turn the second house into a bar and use the courtyard as a beer garden.

The post Waltz Away With a Cool Buy! Czech Dance Hall in Omaha Transformed Into a Residence appeared first on Real Estate News & Insights | realtor.comÂ®.