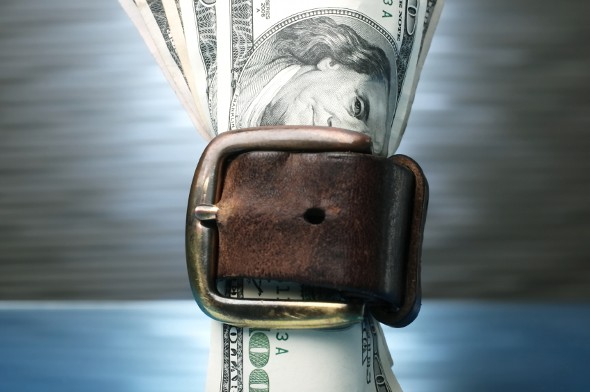 Austerity policies are nothing new. But talk about them in the news has recently escalated. In response to its ongoing debt crisis, the Greek government is preparing to implement austerity measures aimed at helping the country regain its financial footing. If you didnât major in economics or you have no clue what austerity means, read on to find out how this fiscal program works.

Check out our personal loans calculator.

Trust us, austerity isnât as complicated as it sounds. Austerity is a type of economic policy that governments use to deal with budget deficits. A country faces a deficit whenever itâs using more money than itâs earning from tax dollars.

By taking on an austerity package, a government hopes to reign in its spending, improve the status of its economy and avoid defaulting on its unpaid debt. Governments usually take on austerity measures in order to appease their creditors. In exchange, these lenders agree to bail out countries and allow them to borrow more money.

If you look up the word austere in the dictionary, youâll see that it means severe, grave, hard, solemn and serious. Indeed, austerity is nothing to joke about. 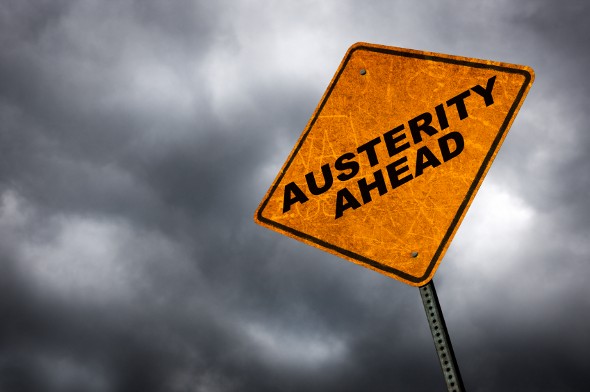 Austerity plans normally involve increases in different taxes, (property taxes, income taxes, etc.) budget cuts or a push to incorporate both. Government workers could lose their jobs or see their wages and benefits either decline or become stagnant. Hiking up interest rates, adding travel bans and keeping prices at a fixed level could be other strategies put in place to reduce spending.

Naturally, austerity measures typically arenât viewed in the best light because they mean that there might be fewer government programs available to the public. Aid for veterans and low-income families, healthcare coverage and pensions are some of the benefits that normally take a hit when a countryâs using an austerity package. Government services that arenât eliminated might not be as comprehensive or as beneficial as they once were.

As you can see, in an austere environment, conditions are tighter overall. Historically, austerity has been implemented in the US during tough times including World War I, World War II and the Great Recession of 2008.

Greeceâs new austerity package â which government lawmakers finally accepted in July 2015 â will feature less government funding, higher taxes and cuts to pension plans. As a result of this deal, the country was allowed to begin talks with its creditors about a third bailout.

Related Article: All About the Greek Debt Crisis

The Problems With Government Austerity

Experts on the economy tend to go back and forth about how effective austerity can be. Some believe that instead of turning to austerity, the government should pump out more money and borrow as much as possible if an economy is on the rocks.

From a political standpoint, austerity is often controversial and results in riots and demonstrations. Anti-austerity protests erupted in Greece, where quite a few folks say that past austerity programs have only made social and economic conditions worse.

Beyond slowing down the economy, an austerity bill can cause a country to remain in its debt crisis, particularly if itâs in the midst of a recession. As fiscal austerity decreases spending, GDP can go down while unemployment goes up. Consumers can get nervous and stop spending and investing their own money.

In short, austerity policies can make life even more difficult for people who are already struggling. Thatâs why governments tend to turn to them as a last resort if other strategies arenât working. 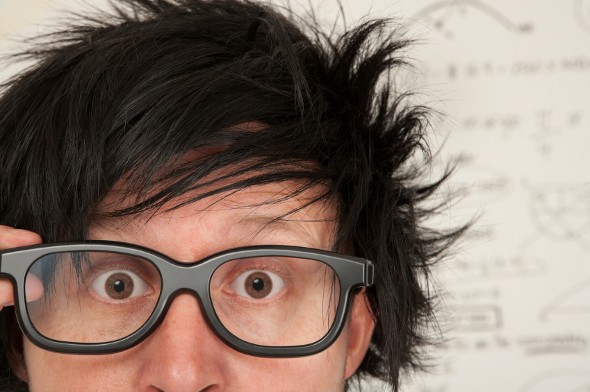 Notable European creditors have argued that austerity can be beneficial to a countryâs long-term economic state. For instance, the International Monetary Fund (IMF) has previously reported that austerity has done more damage than anticipated. But the European Central Bank released a paper saying that austerity has been helpful, at least for some of the weaker eurozone countries.

In fact, austerity has helped strengthen the economies in European countries like Latvia and Iceland. Although Spainâs unemployment remains high, its economy is in better shape overall. Ireland has made considerable progress as well toward rebuilding its economy.

Proponents of austerity policies say that they can make investors feel more optimistic when a country is being run more responsibly. Austerity has the potential to bring a shrinking economy back to life as everyday citizens invest in the private sector instead of relying on support from the federal government.

Try out our free investment calculator.

The US used austerity measures between 2010 and 2014. Not only were our policies harsher than those employed by the governments in the UK and other European nations, but our economy fared better than theirs.

The point of austerity is to tighten the governmentâs belt, bring a countryâs debt back down to a more manageable level and stimulate an economy that has stopped growing. Countries generally try to meet these goals by cutting spending and raising taxes.

The debate over whether austerity works continues but one common theme has emerged. Timing matters. Some critics suggest that cutting too much too quickly during a recession can be painful. When introduced more slowly, however, (or when the economy is doing very well,) austerity measures can turn things around.

The post What Is Austerity? appeared first on SmartAsset Blog.